It was a bitter night and as we reached the screening, snow was really starting to fall heavily. However, there nestled in a little courtyard off Brook Street was our outdoor screening of “Gentlemen Prefer Blondes’ at HUSH, complete with fairy lights, candles, hot water bottles, blankets and hot chocolate…….oh, and most important of all popcorn!

We all agreed that if someone had planned this as a first date, we would have been super impressed.

I hadn’t ever watched the film all the way through, I think I must have caught bits and pieces but never the whole film. I’m quite surprised it made it through the censors in parts, it’s quite naughty! But a real feel-good movie. Easy on the eye and funny.

Travilla designed the costumes in the film and he had a real battle with the censors – but all I can say is he certainly got around it! 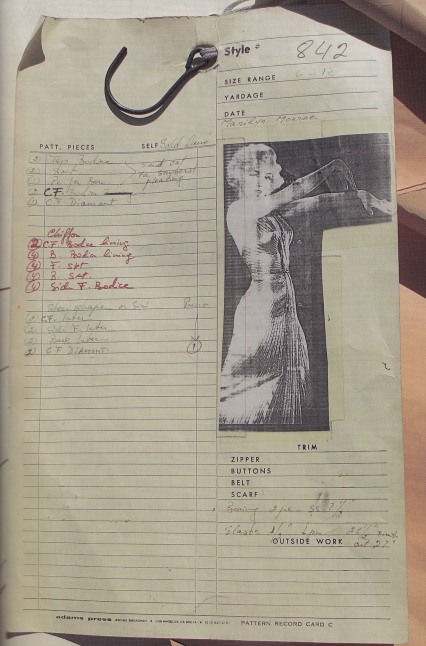 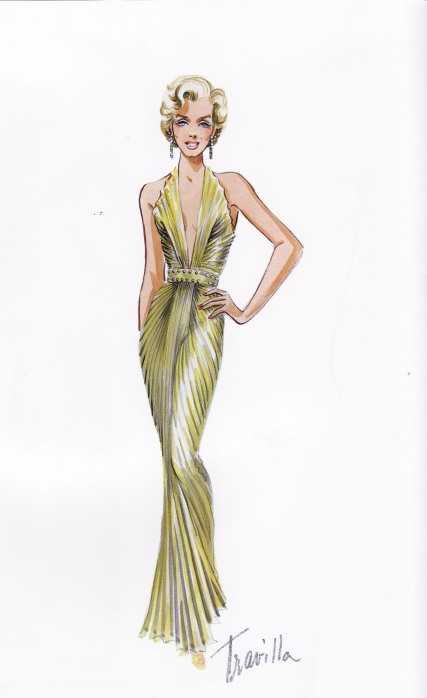 The scene is which Marilyn wears this dress was nearly cut by the censors. She was due to wear this incredibly plunging gold gown, while dancing provocatively with old boy “Lord Beekman” singing a song entitled “Down Boy”! Apparently it wasn’t deemed appropriate!

Having been cut, we only see this halter-neck gown from the back – it stops traffic – partly because of Marilyn’s sexy shimmy and rather perfect behind.

However, the front is even more daring. The dress was created out of a single complete circle of gold lame and sunburst pleated. Every pleat lines up with the back seam and there is an iron V build in the centre of the dress from the waist to the bust – creating the moulding effect. 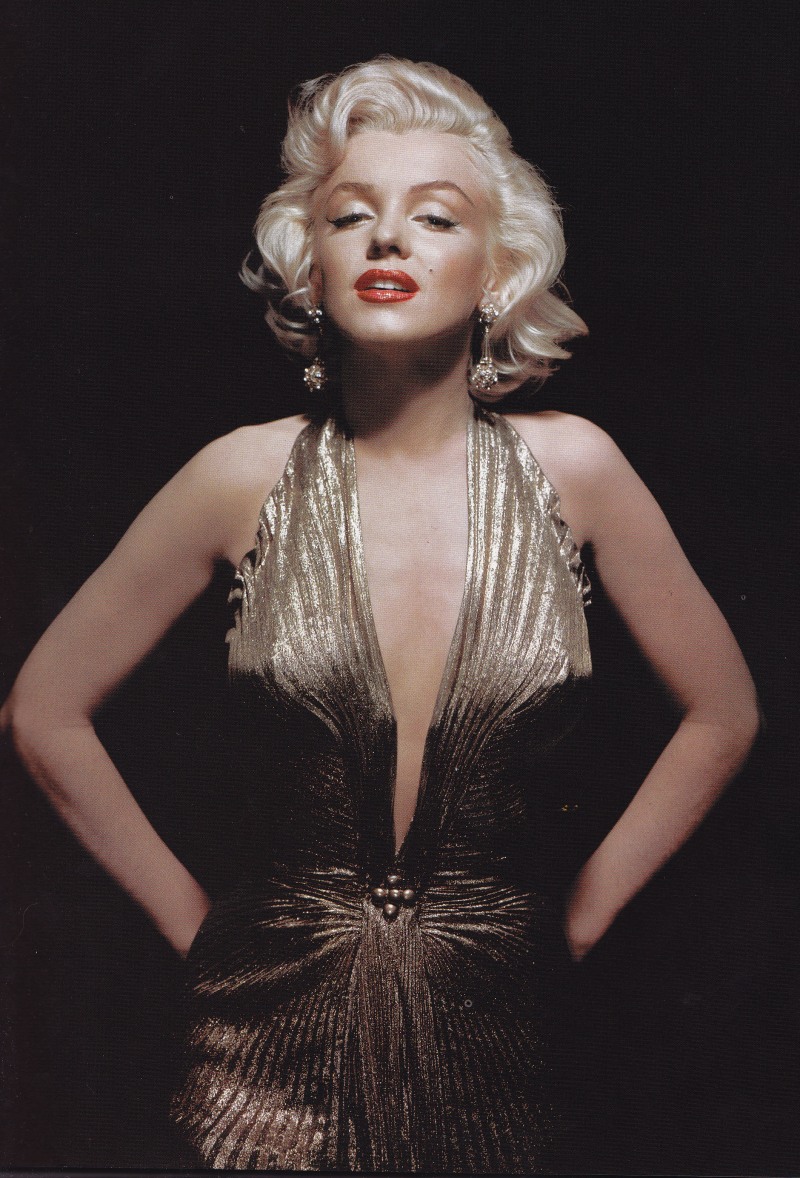 Travilla once said that Marilyn had “the best breasts in Hollywood”, not because of their size or pertness, but because they were wide-set, so he could design dresses that slashed to the waist, without having to pull the breasts apart, or showing too much cleavage. Obviously a designer first, man second!

This dress shows exactly that point. Marilyn had to be sewn into it. In fact it wasn’t even finished.

Cany as ever, Marilyn rather fancied this dress, and realising the effect, wanted to wear it to the 1953 Photoplay Awards. Travilla was not happy. He felt that the dress was for a movie not for a public appearance.

Marilyn won the day, and wore the dress without an underslip, causing a total sensation and Joan Crawford to announce “She looks vulgar”!

Jane Russell and Marilyn enter the ship ball room for dinner and everyone gasps. That’s not just in the film – I took a breath myself and others around me. Marilyn looks sensational and I don’t know whether that’s because the dress is in a colour you wouldn’t normally associate with Marilyn or whether it’s the style? Needless to say it works.

In fact, this dress became a prototype for a personal dress Marilyn had made, in salmon pink. Both were made of chiffon, with boning over the hip and the waist, that finished under the arm.

The pumpkin dress had beading down the centre and on the bustline, with a wonderful pumpkin beaded stole. Believe it or not the zip was in the front. 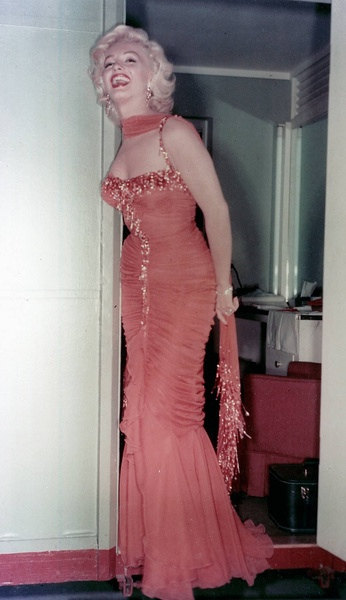 We all also noted that her hair looks incredible in this scene!

Last but definitely not least, the iconic pink dress.

Did you know this wasn’t the dress designed for this scene?

Travilla had designed a breathtaking show girl costume, costing close to $4,000. It never got past the cutting room floor.

It was incredible, as shown here, with jewels sewn onto a black fish-net bodystocking up to the breasts, then covered in nude fabric, embellished with a mass of diamonds. Are you ready for it? Here goes….. 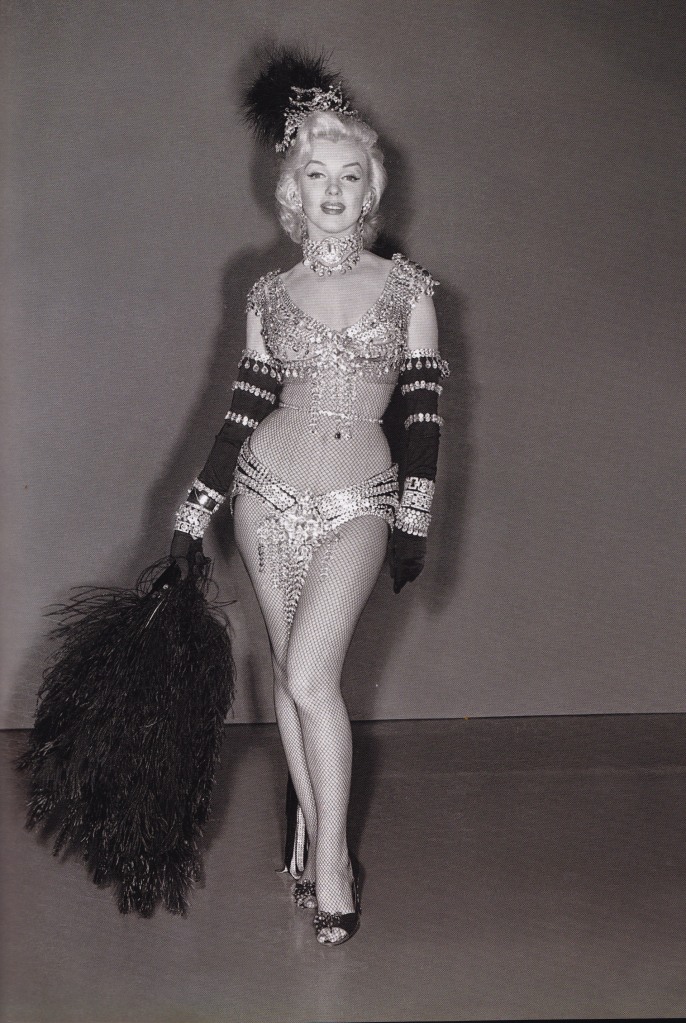 Why was it cut?

Because it came out that Marilyn has posed nude for a calendar back in 1949, when Marilyn was desperate for money. And instead of riding on the revelation, Travilla was given strict instructions to cover Marilyn up.

Thank God we still have the photos!

And so the pink number was born.

This dress was made out of peau d’ange, a sort of silk satin. The aim was to show the outline of the body, but for the dress to move with the body and not crease – which was rather difficult when Marilyn was moving up and down the stairs. 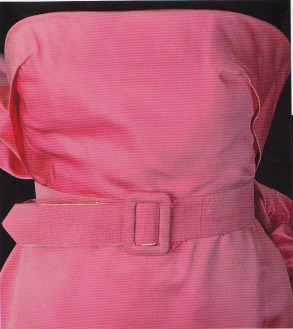 Eventually the silk satin was glued onto felt, with a black lining added to the back, to give it a stiffness.

“Apart from the two side seams the dress was folded into shape rather like cardboard. Any other girl would have looked like she was wearing cardboard, but on-screen I swear you would have thought Marilyn had on a pale, thin piece of silk. Her body was so fabulous it still came through.”  William Travilla

A huge butterfly bow was added at the back, boned and stuffed with ostrich feathers and horsehair. It was sewn on with invisible thread at the sides. 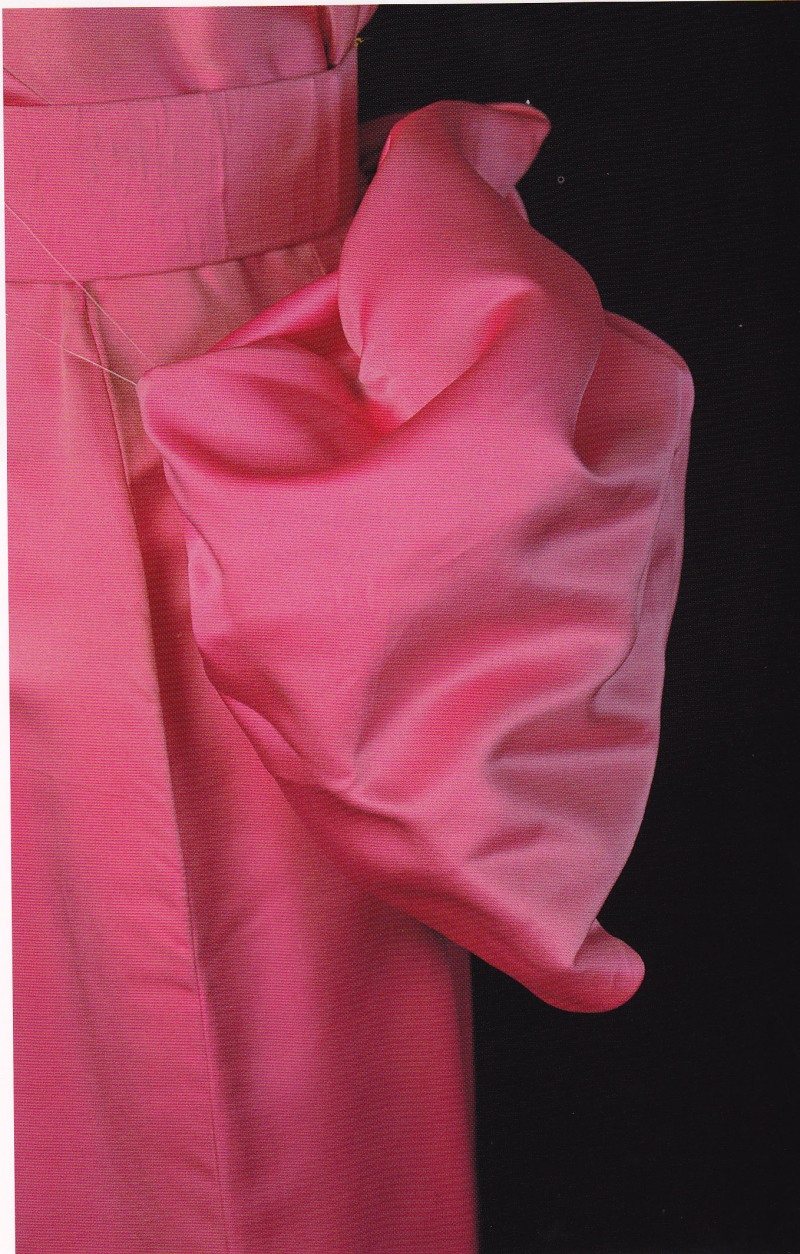 The rest is history. Watch the film – and watch it all the way through – images just don’t do it justice.

As Andrew Hansford says in Dressing Marilyn, “there was a quality that you could never hide in Marilyn; it couldn’t be concealed even with a piece of fabric that was as heavy as leather”.

Gentlemen Prefer Blondes, is a testament to that fact.