So we went to our Argentine Tango workshop at PUSH.

Wow, this dance is so much more complicated than I thought it was going to be. Watching it, you think it’s just going to be a bit of walking and flicking of the feet, but boy the intricacies and detail that goes into it, is way above and beyond any other kind of dancing I have done before.

To see it done at its absolute best (without a trip to Buenos Aires) take a look at the Sadler’s Wells production of Tanguera.

Click on the picture and it will take you to a great clip:

I was lucky enough to see it last year and it was incredible.

There is a scene at the end when all the ladies of the night dance in the Salon. They are all dressed in these corset/leotards with a flapper fringe around the cut of the leg – in murky greys, greens and blue, and obligatory fishnets.

The effect is stunning. 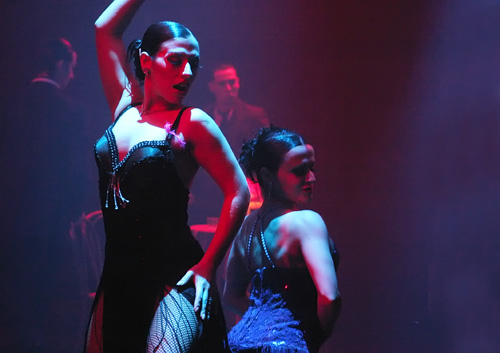 From the workshop, I’ve learnt a little bit about the “etiquette” of Tango, which is fascinating in itself.

Argentine Tango is a bit like a language and there is a whole heap of sexual politics going on. The lead (which in traditional settings would be the man) is the one who initiates the moves, not through his feet but through the incline of his torso.

The follower (woman) is at the mercy of the lead who dictates the pace, and the style of the dance. As demonstrated very nicely by Jessica Biel and Colin Firth in Easy Virtue:

Initially I found this very hard, because it does take considerable effort to let someone else take control. I also found myself thinking, hang on, isn’t this just slightly chauvinist?

It’s almost the woman saying – you set the scene and I will show everyone how fantastic I am and how lucky you are to be dancing with me.

In Frida, you get double your money with Salma Hayek and Ashley Judd both leaving very little to the imagination!

The slower the tango, the more opportunity the man gives the woman to add her own decorations, i.e. those little flicks of the feet.

It reminds me of the dance of the male peacocks, only the other way round! It certainly works for Jenny from the Block (perhaps not so much for Richard Gere in Shall we Dance!)

So I’m completely hooked. If you’re a South Londoner, PUSH are doing a 6 week beginner’s course, which will of course be superb (and you don’t necessarily need to bring your man – as demonstrated by Salma).

So for the hot blooded latin-americans in us all – here are this week’s inspired buys – tango style!