I woke up on Saturday morning with the most horrific hangover, and by 10am I was just praying for the day to end, so I could curl up into the duvet. Ha – no such luck.

Sitting in the car, dark glasses over my eyes, and praying that Mr E’s driving wouldn’t send me over the edge, we passed this little Art Deco shop (Behind the Boxes), which I pass every weekend and always want to go in, but never do.

Anyway Mr E was quite keen to take a look, so we stopped. There were loads of things that I could have quite happily walked away with – and we did succumb to a huge wooden Red Indian, who is starting to scare the crap out of my youngest and a gorgeous art deco lampshade.

As we were leaving I noticed this print in the back of the van, outside the shop, and enquired whether it was for sale. We had to do a bit of bartering but we managed to grap that as well. Not bad for a day which I wanted to end as soon as it had begun!

And what a print it is – you will probably recognise it.

Tina, as she is called, is part of a series that J H Lynch produced for Boots, the chemist.

These retro prints, including those by Tretchikoff, are becoming seriously popular – so I was really chuffed to find one. You  might recognise them from Stanley Kubrik’s Clockwork Orange.

Tina, seems to have been quite a favourite muse – along with Nymph, Lisa and Maria (to name but a few): 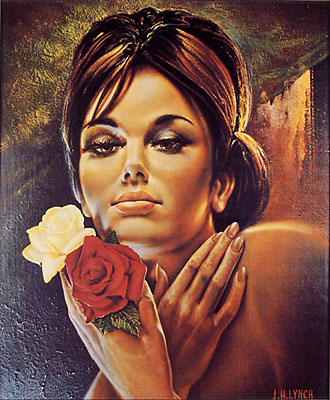 The funny thing is everytime I look at her I just want to start humming that tune in Dr No – “Underneath the Mango Tree.”

She’s my little Bond girl – and in fact rather reminiscent of Miss Taro, in Dr No – what do you think?

Tretchikoff and Lynch were viewed rather dimly by art critics – who described their work as mass market art.

However, at the time, for those that had lived through the austere post war period, it was a glimpse of the exotic – particularly Tretchikoff’s images of The Chinese Girl, Miss Wong  and Lady of the Orient: 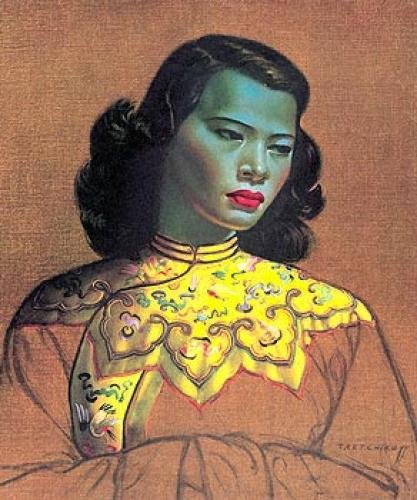 Indeed, designer, Wayne Hemmingway is a great defender of this kind of art, saying:

“I’ve got 70 or 80 prints. It is more than just what the art looks like. It is what it stands for. The idea of having a Constable on my wall, I wouldn’t see the point of it.

“A Tretchikoff – it means it’s exotic, it means something about my background and where I’m from and my nan. Art can be all things, it doesn’t have to be something that is beautifully painted.”

“Tretchikoff achieved what Andy Warhol stated he wanted to but never could because of his coolness.”

“If you were to go out and stand with a picture of his in a cool part of any city and spoke with people who understand modern cool, the majority will say good things about it.”

In fact Hemingway and Stella Mitchell’s collection is now part of the world’s largest and best collection of British popular culture – called the Land of Lost Content, and you can now by the prints as fridge magnets and coasters, through Hemingway Design.

But perhaps best of all, the collection has now been reproduced by Surface View, so you can now get your own Tretchikoff or Lynch mural – how cool is that? 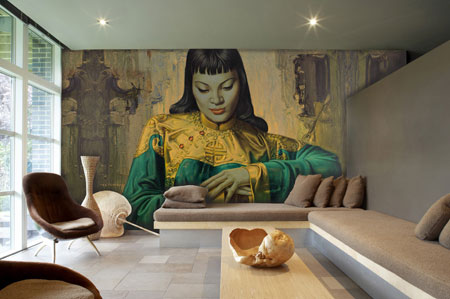 I might forgo the mural for a while, or she could scare the crap out of me, particularly after an evening of having one too many!

Personally I prefer my sultry Honey Rider, singing “Underneath the Mango Tree”, in my kitchen!