Sometimes there’s nothing like a good old-fashioned dose of historical design to hit the inspiration button like a thunder bolt.

Seville was no exception – in particular the Royal Palace or Alcazar. It was truly jaw-dropping.

(Although rather difficult to find – that could, however, just be my husband and I – we must have passed the same horse at least five times and were way to embarrassed to ask where this incredible attraction was housed.)

Just when I was about to give up and focus on locating an all important cerveza, we finally found what we were looking for. (Note to self – follow the tourists!)

And boy, all thoughts of cervezas went out the window. This is one mother of an “attraction”. 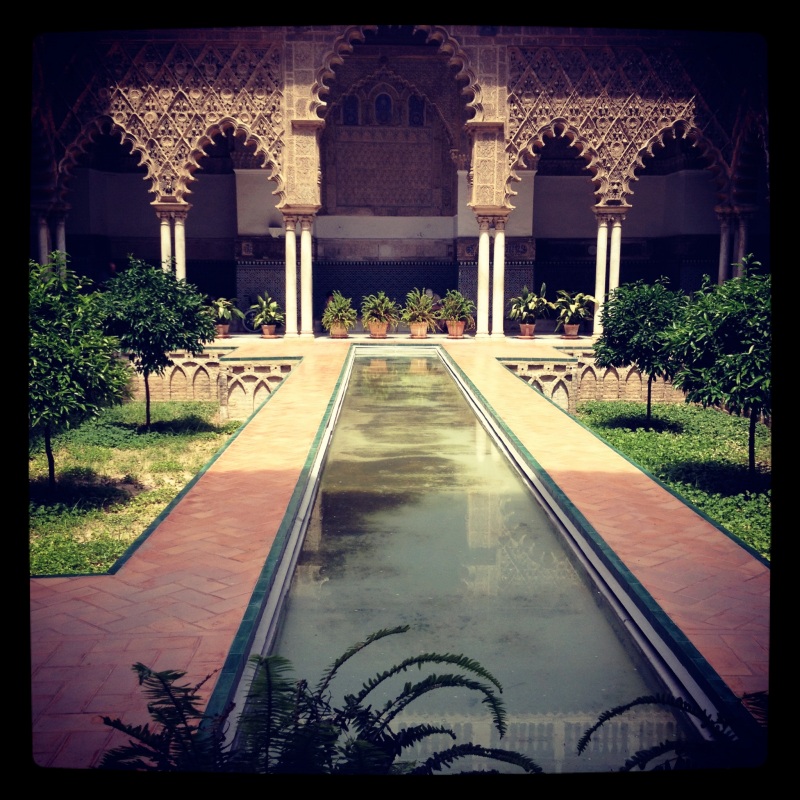 The Palace used to be a Moorish fort and in the middle is this spectacular courtyard – The Patio de Las Doncellas (or Courtyard of the Maidens). It was also used by Ridley Scott as the court of the King of Jerusalem in the film Kingdom of Heaven. It proved a fantastic place to experiment with Instagram.

For a textile designer, the rooms leading off the courtyard, must make you feel like you’ve died and gone to heaven.

Hall after hall of Moorish (or Mudejar) tile designs – every wall has a slightly different pattern and colour – so subtle that you really have to examine them quite closely to see the differences. It is absolutely incredible.

I tried to capture as many of the different designs as I could, so I could reference them later:

And whilst the main point of this post are the breathtaking tile designs, I couldn’t finish without a peak at Los Banos de Dona Maria de Padilla.

Just when you think you’ve seen it all, there, tucked inside a grotto, is this unbelievable rainwater bath – the baths of a Castilian noblewoman, mistress of King Peter of Castile, who he eventually married in secret in 1353.

That’s quite some gesture from someone nicknamed Peter the Cruel!