I was reminded today that posts have been a little sparse of late. So I thought it was about time I showed you what I’ve been up to the last three months.

One of the assignments at LCF was to compose a blog where all our written pieces could sit – an umbrella, one could say, with a central theme. Not an easy task, when your interviewing whoever you can get hold of, and just hoping that you might come across some tenuous link that might tie them altogether!

Finally I decided on the theme ‘All in the Detail’. See what you think?

This was my feature which, as you can see, was right up my street! You might even recognise a few of my usual suspects! Enjoy…..

Fashion has a new hero in town and they are proving to be quite the chameleon. With luxe and high street brands discovering they can conjure up their perfect muse, fashion illustration is experiencing a renaissance.

The ends of her hair are literally dripping in ink, great globules of thick black oil, fingers holding the edges of her skirt, a flamenco affair. Her eyes are sunken and apart from her velvet jacket, she doesn’t look in the mood for frivolity. In fact she looks like she has something much darker in mind.

In what gothic fantasy has this women appeared from? H&M, Zara and Elle, to name but a few. This is the world of Laura Laine, fashion illustrator from Helsinki, whose lock-laden creatures have slithered their way onto high-street t-shirts, via the pages of The New York Times.  She’s in good company too. Take Prada, who not only published a book last year featuring menswear illustrations by Richard Haines, but then subsequently used those illustrations as part of a unique mobile app, involving a virtual tour of “La Palazzo” Prada. Or Chloe, who chose Sandra Suy to celebrate their 60th anniversary in a series of fresh and radiant illustrations. From cutting edge technology, to the sheer beauty of the hand drawn, fashion illustration is catching the eye of every creative in town.

Who should be championing the cause but fashion’s favourite trailblazing photographer, Nick Knight.

” Fashion illustration has been enjoying a renaissance in the digital age” he said, “thanks to the skills of a young, tech savvy generation of illustrators”.

As founder and director of Showstudio, an online platform promoting creative expression in the fashion industry, Knight recently endorsed this resurgence by commissioning seven illustrators to interpret catwalk looks from key designer labels.

This isn’t a new bandwagon mind you. Fashion illustration reached its zenith in the early twentieth century, most memorably by Erté, on the front covers of Harpers Bazaar. But as Ria Hawthorn explains, curator of the exhibition “Drawing Fashion” at the London Design Museum, “it went through an enormous decline, certainly after Condé Nast discovered around 1932 that photographs on the cover of magazines sold a lot better.”

With photography emerging as the favoured medium, fashion illustration experienced a swift transition to the domain of advertising with Gruau’s sophisticated images dominating the scene in the 40’s and 50’s, and Antonio Lopez in the 70’s. It was the nineties and the rise of the digital age that really put fashion illustration in the shade. As illustrator Sara Singh explains, “When I began my career in the mid-90’s I was told that this wasn’t really a profession any more”. So why is the spotlight turning back onto the art of drawing, when the market is saturated with the latest photography apps and social media encourages us to instantly reportage every moment of our lives?

Perhaps it starts with the word saturated. “I think it’s the quality of photos in major magazines right now. They are just…boring,” suggests Marcus Khan, founder of fashion illustration site Draw A Dot. Robert Richards, curator of “The Line of Fashion”, in Manhattan agrees. “Photographs are beginning to look alike – a camera can only see what it sees”. Is it perhaps that the fickle finger of fashion has decided that photography has become too mainstream?

Sue Dray, illustrator and course leader at the London College of Fashion chuckles sagely at this suggestion. “Fashion illustration has become a novelty again because it’s new to a whole generation of people. Handcrafted techniques are very fashionable at the moment, it’s all part of being unique and different”. Tony Glenville, author of “New Icons in Fashion Illustration”, agrees, “We are currently re-discovering craft and technique and seeking to preserve skills – that were in danger of disappearing”.

“At London Fashion Week I attracted more attention drawing than the clothes themselves.”, Dray recalls. “Everyone wants to see you drawing, there’s magic in it. It gathers people round, it’s like witnessing something really quite special”.

It’s a fundamental point. Yes, we’re a fickle and perverse lot who love something novel, whether it be genuinely new or not. Would sketching at a fashion show be a spectacle in 1930? Possibly not? But the key is in the “magic”. As Tony Glenville explains “you can give people all the tools but they have to have a special something”. And that something is capturing the mood and creating an individual expression which has the big brand boys banging down the doors.

In her introduction to “Fashion Drawing” Michele Wesen Bryant writes “A fashion drawing is a bit like a fairytale, an imaginative invention that incorporates just enough reality to tell a convincing story”. Cecilia Carlstedt depicts eclectic glamour, bold and graphic. Emma Leonard specialises in melancholy girls, “if you say something that really pleases them, they just might give you the hint of a smile” she jests. “However, that is very rare!” As Tony Glenville explains, often it comes down to timing and perfect collaborations. “Italian Vogue and Mats [Gustfson] were such a perfect partnership where everything came together.” And the result of such harmony? “The illustrator can conjure up the feeling, the atmosphere, the persona that is being projected. It can conjure up a lifestyle,” remarks Sue Dray.

This is what the mega brands are buying into or, as William Ling at The Fashion Illustration Gallery succinctly explains, ”Fashion illustration is commissioned by the world’s leading creative directors in order to create a point of difference and unique take on the collections they are working with, from competing visual communications”. A difference that Danny Roberts, a Californian illustrator, knows only too well. After studying photography at college he realized “it was going to be hard to distinguish myself with a camera.” So, after swapping his camera for a pencil case, he is now renowned for his maverick caricatures of the movers and shakers in the fashion world.

Roberts is indicative of the new breed of fashion illustrator. He has collaborated with Forever 21 in creating his own line in t-shirts, his landscapes feature on the derby shoes of Wells and Stellberger and illustrations feature on canvas totes, satchels and hooded sweatshirts for Gwen Stefani’s Harajuku Lovers. “The work I’m doing now is a kind of roundabout way of getting there”, he says “ I’ll probably start my own label eventually.” The role of the fashion illustrator is ever diversifying. 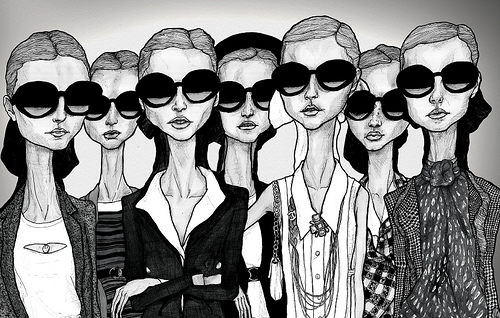 Look at blogger Garance Doré, whose popularity is as much to do with her girly repertoire as it is about the illustrations that accompany them. Designs, which, you can now buy as original art prints or as posters, with a special section reserved for future collaborations. Notice a trend?

“Designers are calling on illustrators to design just about everything, from in-store graphics and brochures to the window display,” says Lucie Muir at the New York Times.

And, ironically, the digital age, which once prompted a decline in fashion illustration, is now driving its popularity. From direct selling platforms such as Etsy, to YouTube tutorials, anyone can purchase their own illustration or indeed create their own. As lecturer at the London College of Fashion, Ana Stankovic-Fitzgerald puts it “Easy access to user-friendly technology is changing the way [that] fashion illustration is created and who by; and at the same time increasing it’s potential audience”.

With Photoshop and Illustrator providing a myriad of styles, from other-worldly luminousness to minimal lines, digital illustrators, such as Jason Brooks and Autumn Whitehurst, are making a name for themselves in their own right. So, it’s no surprise to discover that Sue Dray recently held an open workshop for students at the Apple store in Covent Garden, on digital artwork and how to draw on an iPad. “Even if it’s being done on a computer it doesn’t take away the fact that it’s a handcrafted piece of work,” she says.

Tablets and apps are one thing but if we look to Nick Knight and his group of visionaries, film is the future. Garance Doré agrees, “Video is the future of the internet” she says “so it is really something that is worth exploring”. Fashion illustrators are already prepared –  Julie Verhoeven is illustrating music videos, Tanya Ling and Jo Ratcliffe are designing animated films for Louis Vuitton and Kenzo; and Tara Dougans is using the power of the GIF to amplify the experience of her illustrations.

These mass-medium illustrations are depictions of our times. “Capturing the ephemeral world of fashion creates a document of our society and the times in which we live” writes Tony Glenville. “Often the seemingly inconsequential drawings and portraits of fashion illustrators tell us more about our values and lifestyle choices”. Just as today’s illustrations portray our obsession with cross platform communication, yesterdays emulate the vibrant pop art scene, before that the decadent decades of the Ballet Russes. “I believe it’s all tied together,” affirms Ria Hawthorn. “If the illustrations are exciting then they will capture the spirit of the age”.

So while the game remains the same, it’s the rules that keep changing. For Richards Haines and co, diversification comes in the form of video, animation, and virtual apps. “It’s a wonderful part of modern story telling” he says. For Erté and Gruau, it involved theatre sets and costume design. And the name of the game? Sue Dray smiles, “ we are always looking for a new way of beguiling people”.