The prompt for this post was the Terence Conran exhibition at the Design Museum, which is definitely worth a visit for all those interested in vintage pieces and design (and doesn’t finish until March 2012!). Perusing round the various, “Heals & Habitat”, styled furniture and textiles, I came across this dressing table . This is one classy, cool piece dressing table. It’s chunky, almost masculine, with an industrial edge but is still somehow elegant. Only a really cool cat could have sat at this hunky beast.

Looking back at the icons of that time and the movies around, I came across Jan Morrow, the Doris Day character in Pillow Talk. A successful “interior decorator”, this lady has a sharp tongue  and effortless style – a cool cat indeed! She takes no time at all cutting Rock Hudson’s womanizing character, Brad Allen, down to size and almost decapitating the tentacle-like grip of one ardent admirer, saying “Tony, I never met a man with so many arms!”

At one point Jan says “I have a good job, very nice apartment, I go out with very nice men, to the best places, the theatre, the finest restaurants, what am I missing?”.

The scene then cuts to Jan going to her dressing table…and there you have it…thats what she’s missing! The dressing table is a travesty. Almost frou-frou and chintzy, this is not the dressing table of a hip 1959 mover and shaker. In fact, the apartment in general is not a reflection of the character, but more of the Doris Day stereotype, pink and sugary. 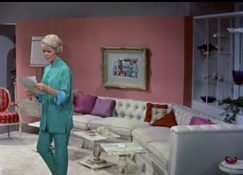 Highlighting the disparity in the two characters Ross Hunter, the producer, of “Pillow Talk”stated at the time :

” Doris hasn’t a clue as to her potential as a sex image and no one realised that under all those dirndls lurked one of the wildest asses in Hollywood. I came right out and told her “You are sexy, Doris and it’s about time you dealt with it”.

“Oh Ross, cut it out. I’m just the old-fashioned peanut-butter girl next door and you know it”.

“Now listen, if you allow me to get Jean Louis to do your clothes. I mean a really sensational wardrobe that will show off that wild ass of yours, and get some fabulous makeup on you, and chic you up and get a great hairdo that lifts you, why every secretary and every housewife will say, look at that – look what Doris has done to herself. Maybe I can do the same thing”.*

The apartment of Brad Allen, however, is much more what I had in mind. Slick lines, exposed brickwork, understated style but personable and warm. Ok, perhaps a little too slick with switches along the back of the sofa to turn down the lighting, put the music on and turn the sofa into a bed, but – as Brad states “the man who lived here before had very long arms!” .

You could imagine the Terence Conran hunky beast being very much at home in this apartment! 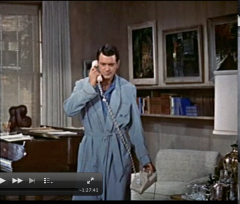 I set myself a little challenge. Could I find a contemporary version that could reflect the same stocky stylishness? Funnily enough I found this rather unusual piece at Made.com. It’s not as solid as the hunky beast but does have that masculine edge and is certainly very sleek and cool (it even has a beautiful table in the same style!)

If your looking for an original there were quite a number of gems to be found on ebay, like this beautiful rosewood one.

So Heals and Habitat, are you listening, a lady needs a large mirror but we’re not too sugary to dislike a cool, hunky beast in managing our intimate affairs – even if it ‘s in the form of a dressing table!

That’s all for now folks!

* Quote from Doris Day and Ross Hunter from “Dressed, A Century of Hollywood Costume Design” – by Deborah Nadoolman Landis