David Downton you’ll no doubt be familiar with – having done many projects with Vogue and, in particular, illustrations for The Golden Age of Couture exhibition at the V&A. There were many exquisite prints for sale including this beautiful one of Doutzen Kroes, or as David said “some model”, in a stunning red dress – backstage at Valentino, apparently  being shown how to pose – some model indeed! 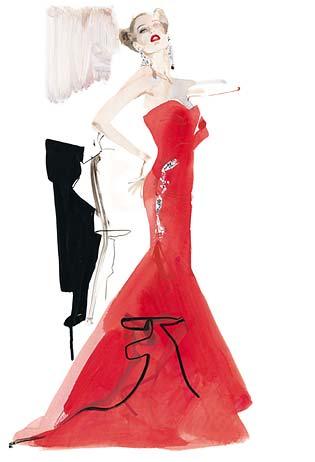 Curiously there was another illustrator there, who, pen in hand, was busy sketching a steady stream of visitors. I didn’t recognise the work immediately but after having viewed the portfolio of prints I suddenly realised why his style was so distinctive – the iconic Hedkandi covers – aka Jason Brooks.

Having studied at St Martin’s, Jason’s first assignments were doing sketches of the couture shows in Paris for The Independent. Since then he hasn’t looked back! Jason was one of the first illustrators to use computer technology and his imagnative and flawless images have been snapped up by many luxury brands and record labels. Notably Hedkandi who have sold in excess of 5 million albums, all feature that distinctive uber-modern style.

To be honest, suffering with the flu, I wasn’t feeling particularly uber-modern or stylish for that matter, but these chances don’t come along often. So clutching my array of tissues, I posed and I wasn’t disappointed. I’m sure he knew not to pay too much attention to my puffy eyes and red nose!  The sketch is too big to scan straight in so I have had to take a photo instead and will stand proud in amongst some of his other (admittedly more glamourous) works. Spot the difference!!

Funnily enough, as I was leaving the exhibition, Jason was drawing David Downton, who was commenting that there was no way he would sketch with the public watching intently over his shoulder and he sure has a point. This man was sketching as if he was making a cup of coffee – totally effortless. How comfortable must you be in your own talent to allow others to scrutinize your every stroke and be so warm and personable? That in itself must be a gift?

Another illustrator whom I love and whose work was on show was Daisy de Villeneuve. The feel of her work is almost 80s – vintage,  with the neon colours and punk hair-dos. But the pieces that I love the most are those that are sketched on scrap lined paper featuing random typed comments. It’s almost as if you’ve just walked in on a half-told story. Daisy’s whole portfolio is shown on her site as well as her series of books >>

Another favourite is Zara Woods (Woody) who creates these wonderful characters such as Starlet, Pick me up Pom Pom, and Small Wonders: 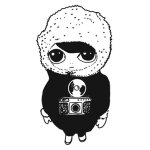 Zara creates “Little Treasures”, which are tiny pendants with individual sketches – let me tell you if I ever have £200 – £300 to dispose of these would be first on my list! Zara has a great site with all her projects and a shop. Definitely worth a visit! >>

Interestingly both Zara and Daisy have collaborated with Topshop – could we convince them to do more?

So now I have my own little treasure – which I shall frame and cherish – not quite Hedkandi but its probably best not to frighten the children!

That’s all for now folks Cxx